The fastest man in the world took some time out of his relaxing holiday in Australia to do what he does best… obliterate the opposition! Only this time it was on a day out paintballing with the world leader in paintball games, Delta Force Paintball.

On a cool day in Melbourne 150 lucky customers got the surprise of a lifetime as they saw Usain Bolt walk into the base camp, along with brother Sadiki, best friend Chris and former Australian sprint champion John Steffensen.

The Olympic Gold Medallist left the opposition standing as he charged through enemy lines to win every game.

Bolt really enjoyed the experience saying, “the Wild West scenario was amazing, it was the best!” The group were very impressed with Delta Force Paintball’s high quality equipment and even wanted to take some home. “We just don’t have equipment like this in Jamaica…” 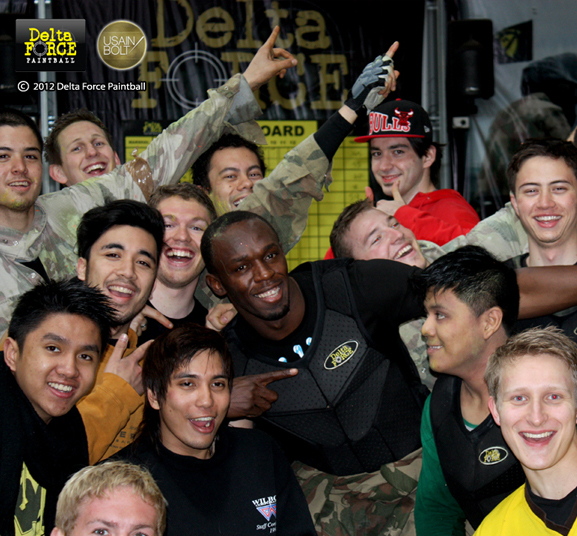 We’d like to thank Usain for choosing Delta Force as the venue for his paintball experience, and we hope to see him and his friends again soon.

Delta Force Paintball is known for its incredible movie-set game scenarios, world-class facilities and state-of-the-art equipment. Our professionalism, quality scenarios and 100% safety record have put us at the forefront of the paintball industry.

Over the years Delta Force has hosted paintball events for quite a few celebrities, including sporting stars, actors, musicians, politicians and reality TV show winners.

Contact us to book your next world-class paintball adventure, you never know who you might run into!